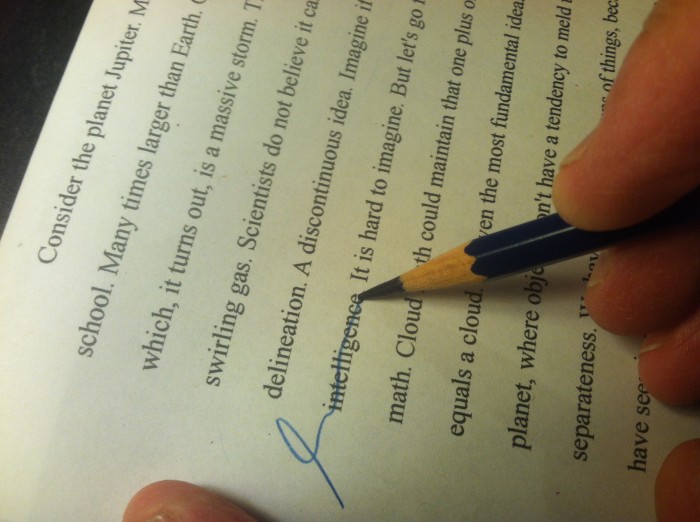 C. edits a manuscript with his Col-Erase blue.

We met at a small vegetarian cafe in a New England town overrun by antique shops. By arrangement, he and I were the only two customers. “The owner and I go way back,” he told me. So we were allowed to chat inside for an hour before the place opened. He asked for a slice of strawberry rhubarb pie and ”a coffee, brown.” I got a coffee as well.

“You’ll be sorry you didn’t order the pie,” he said.

He wishes to remain anonymous, so, when I get tired of pronouns, I’ll call him C. He worked in various aspects of the publishing world for over two decades, and he agreed to talk with me about the pencils.

“Like most people in the publishing world, I just sort of fell into it. I had recently gotten out of the Navy, and I was looking for work. I had no idea what kind of job I might be qualified for. At the time I was reading A. Scott Berg’s biography of Max Perkins, Editor of Genius, and I thought it sounded like something I could do. And there was something romantic, something inviting, about the idea of reading through manuscripts and marking them up with a special blue pencil.”

“Perkins edited the works of F. Scott Fitzgerald, Ernest Hemingway, Thomas Wolfe, and a bunch of others. Some authors say Perkins’s pencil was “red” or “blue” but none of that ever had ‘the ring of definitiveness’ for me. It sounded like they were just tossing in a detail to make it more colorful, pun intended, like, ‘Perkins, the patron saint of the blue pencil blah blah blah’ or ‘Perkins wielded his red pencil with blah blah blah…’ Did they know for a fact that Perkins used this or that color pencil? Or were they just making assumptions about the kinds of pencils editors typically used? I suspect they were just making it up. Does it even matter?…Guess what? It does.”

“Do you know what color Perkins really used?” I asked him.

He thought for a minute, savoring a forkful of pie a little too demonstrably—teasing me, and then changed the subject. He told me that two weeks after coming ashore, he had spotted a classified ad in his local newspaper: PROOFREADER WANTED. C. was the only applicant for the position, and the day after his interview, he had a job proofreading for a small vanity press. He wouldn’t describe any of the books he worked on (except for a five-volume collection of stories told from the point of view of a duck, which I have not been able to find in my research). But he did tell me how he worked his way up in the company, later writing “jacket copy,” meeting with authors, and editing manuscripts.

At the small press, he recounted, regular graphite pencils were the rule. “Probably Dixon Ticonderogas. The office supply closet was full of them.” He found himself wondering when he was going to see, or maybe even get to use, one of the legendary blue pencils.

After a few years, he moved on to a university press, then later to a publication by a foreign policy think tank, and finally, a writing and editing position for an organization he would only refer to as, “the agency.”

As he worked his way up in the publishing world, he learned the real story about colored pencils. There were “editorial colors,” and manuscripts got more and more colorful as they got passed around. Different publishers used different schemes. For example

Eventually C. became a freelance editor, and borrowed the color system for his own purposes. He used different colored pencils for different stages of his own editing process. He could tell when and why he had made certain notes, based on whether they were red, blue, green, or, in one case, brown. He told me that the colors were “100% pragmatic,” and said that using a different color never effected what he was writing. He only worked with Col-Erase pencils. After trying a few different brands, he refused to use anything else.

C. sharpened a dozen pencils—every pencil in the box—each time he sat down to work. He would set them down on one side of the desk. When a pencil needed sharpening, he put it on the other side. This way he wouldn’t have to interrupt himself during long sessions. Using the different colors allowed him to stay focused on particular goals, compartmentalizing and essentially color-coding his time.

“I’ve never read anything about this system in any of the books I’ve read about publishing,” he told me. “No one gets into these kinds of details.”

“So you don’t know what color pencil Max Perkins really used?” I asked.

“They don’t say so in the biography.”

I waited for him to say more.

“But I had to know, so I visited an archive and I looked at some of the manuscripts he edited.”

He smiled, “It wasn’t. Neither is strawberry rhubarb pie.”

(This article originally appeared, in a slightly different form, in the September/October 2015 issue of “The Pencil Collector,” the Official Publication of the American Pencil Collectors Society.)