Clearly, there are times when it’s appropriate to have a pencil behind your ear, and then there are, well, other times. Our specialized sense for this particular appropriateness is based on things like the profession of the pencil-wearer, what else the pencil-wearer is wearing besides a pencil, and the situation in which the pencil is worn. We make lightening-fast assessments in this regard. Plumber with pencil behind ear? Fine. Same plumber, same pencil, at a wedding? Not so fine.

Generally speaking, the pencil behind the ear is an appropriate accessory for men and women who work with their hands, and also for folks who need to jot things down now and then, like reporters, detectives, and police officers. It’s also appropriate if, for any reason, you happen to be wearing an outfit made entirely by Dickies or Carhartt.

For a nice span of decades, my dad enjoyed work situations where he could have a pencil propped behind his ear. He was a high school shop teacher. He taught woodworking, drafting, math, and computers. On weekends, he built cabinets and bookshelves and go-karts and performed other minor feats of carpentry. For much of my young life, I saw him with a pencil behind his ear. He favored blue Berol drafting pencils, the kind with the silver ferrule and no eraser, usually in a 4 hardness. He still likes them, and I feel a special nostalgic thrill when I use one.

After he retired from teaching, my dad got a job designing cabinets, and kept on building sheds and shelves too, and wearing a pencils behind his ear for many more years. 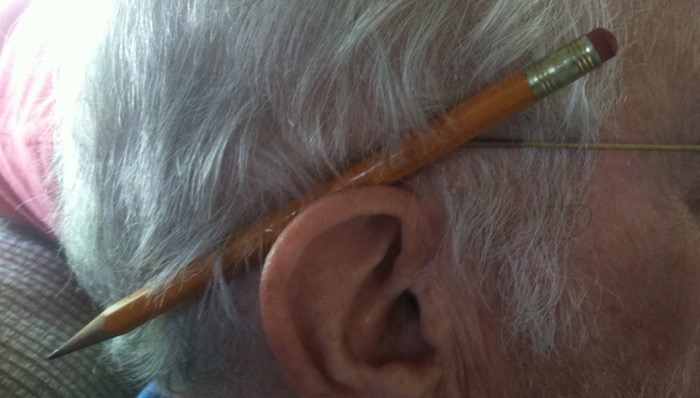 His streak finally ended when he got a job as a gentleman host on a cruise ship. He travelled the world for a several years on giant luxury ocean liners, seeing every continent but one. Onboard, he danced in the ship’s ballroom, entertaining lonely ladies after dinner. His new profession required him to wear a tuxedo. Had he worn a pencil behind his ear, he would have been called into the office of the supervisor and been told to please keep his ears free of writing implements while on duty.

Then, after a while, my dad got tired of the seafaring life and returned to dry land. He found a job at a living history museum—one of those places where employees or sometimes volunteers—called heritage interpreters or players—dress in period garb and loaf around historically accurate reconstructions of, or sometimes restored original, buildings, and act like they would if it was 1815, or some other time of interest. The players spin wool, build canoes, churn butter, forge horseshoes, that type of thing. Tourists walk around and ask the players lots of questions. It’s especially fun when the players take their roles seriously, if, when you ask them about their iPhone or their TV set, they pretend they’ve never heard of such things.

At the living museum where my dad works, he’s a carpenter, and the year is roughly 1875. He fixes boats, carves wooden toys, and builds farm tables, all with hand tools, and as far as pencils behind the ears go, he’s back in business.

I need to interrupt here for a moment and tell you about something much closer to the present time. Last Christmas I gave my dad a copy of The Pencil, by Henry Petroski. Since then, he and I have coordinated reading it “together” at a very leisurely pace. Every few weeks, or months, I call him and we gab on and on excitedly about the high points of the latest chapter: Thoreau! Koh-I-Noor! Lothar Faber! You get the idea.

Ok, back to the past. Recently, a group of tourists from France was visiting, asking my dad about his work, when a middle-aged man with a thick French accent suddenly said,

“You know…you really shouldn’t have that pencil behind your ear. It’s not appropriate for the time period!”

Well, my dad didn’t just have a pencil propped next to his brain; thanks to our little nerd club, he also had a nest full of pencil facts inside his brain. And so, he replied,

“Actually, pencils were available in the colonies in the early 1800s. In fact, it was during the late 1700s that a process for mixing clay with powdered graphite was developed. I think it was a Frenchman who patented it…”

An elderly woman in the tour group spoke up. She said one word,

Conté indeed. In 1795 Nicolas-Jaques Conté was granted a patent for inventing the process of making pencil lead by mixing graphite, clay, and water, and pressing it into long molds, which were then dried and baked. Everyone knows that, right? The sharpshooter kept his mouth shut for the rest of the tour. 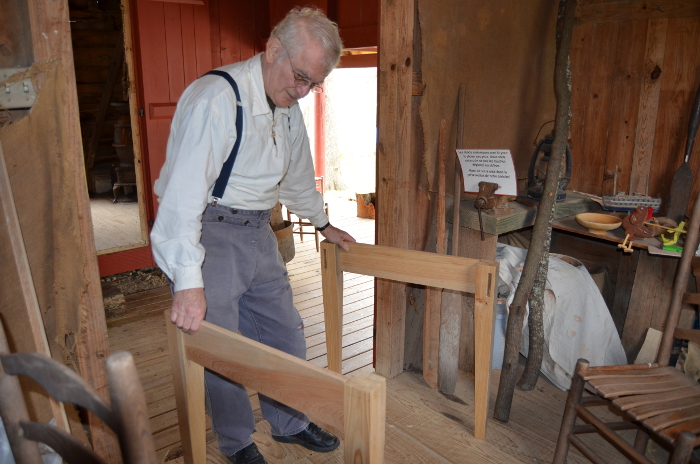 He looks like a mild-mannered carpenter from the 1800s, doesn’t he?

(This article originally appeared, in a slightly different form, in the May/June 2015 issue of “The Pencil Collector,” the Official Publication of the American Pencil Collectors Society.)