“Who wants to be secretary?”

I looked around the room. No one had raised their hand.

“The secretary position has no duties whatsoever.”

I looked around again. Still, no hands were up, so I slowly raised mine.

“Ok, Danny!” Dr. Scheuermann said, making a note on a piece of paper.

And that’s how I became Secretary of the Southern Connecticut State University Math Club.

A few weeks later, at another meeting (They served free pizza every week, by the way.), Dr. Scheuermann said,

“We have extra money in the club account from the book sale. Would anyone be interested in going to the A.M.S. Math Convention in San Francisco?”

I looked around the room. No one had raised their hand. I hesitated. I had just joined the club. I looked around again. Still no hands. I raised mine.

Dr. Schueremann made a note on a piece of paper. Some more math club members raised their hands, and a few more notes were made.

“I’ll see if we can get the trip approved…”

Months later, I was on a plane to California–my first time there, all expenses paid.

(Moral of the story: Raise your hand.)

On the plane ride, I discussed multi-nomial coefficients with the math club president. When we got there, we checked into a gorgeous old hotel in the middle of San Fransisco, and then we went out for dinner at a burger place.

In the morning I hit the convention full speed, attending talks with titles like this:

The Dynamics of the Periodically Forced Sigmoid Beverton-Holt Model, part I.

The Dynamics of the Periodically Forced Sigmoid Beverton-Holt Model, part 2

(There’s a mathematical typesetting language called LaTeX, and that’s what all the business between dollar signs is. But, wow, leaving raw LaTeX in the talk titles for your show program? Who knew mathematicians were so bad-ass?!)

Truth be told, I was in the applied math program, so the titles of the talks I attended were more like this:

Nonetheless, the talks humbled me severely. Mathematicians ten and twenty years younger than me were working on stuff I’ll never, ever, even begin to understand. I sat through one talk after another, getting more and more hopelessly frustrated, basically giving up on the idea of doing anything in the field.

After a day of attending mathematics presentations from eight in the morning until six in the evening, I had a realization:

So I started making brief appearances in the morning–said hello to my professors, attended a talk or two, and then I ducked out and wandered the city all day, and all night. I explored shops and libraries; I went to the Asian Art Museum and the Museum of Modern Art; I spent the better part of a day in a tea house–talking to the salesmen, sipping P’uerh and Silver Needle tea and chatting with people from all over the world.

One day I decided to go see the Golden Gate Bridge. I kept taking the wrong buses, having to ask strangers for help, wandering around. And when I finally got there, my phone battery had run out. I couldn’t take any pictures, so I had to just take it in with my eyes, and it felt so great to just see this massive bridge. Of course I had seen pictures of since I was a kid, but now it was right in front of me. It really was magical, and I walked across it. And then I was stranded, because there were no more buses for day. But I talked the driver of a tour bus into taking half the usual fare to let me ride one way back into the city. It was an open-air top bus, and I rode back as the sun set.

At this point maybe you’re wondering, where were the pencils? Good question. They were in the vendor area. At the convention center, in addition to all the little classrooms and lecture halls, there was a massive room full of vendors, all with tables set up, selling stuff.

And you’d be surprised how much math merch they have at those things. Besides textbooks and scholarly publications, you can buy Mobius scarves, Klein bottles, math games and puzzles, coffee mugs with equations on them, math T-shirts, math software, math mouse-pads, math calendars (perhaps the most lucrative application of fractals), and so on.

Some vendors gave out promotional pens, stickers, key-chains, notepads, and sometimes canvas bags. A German publisher of math books, De Gruyter, had a small box of pencils at their booth, with a little sign that said “Take One.” So I did. 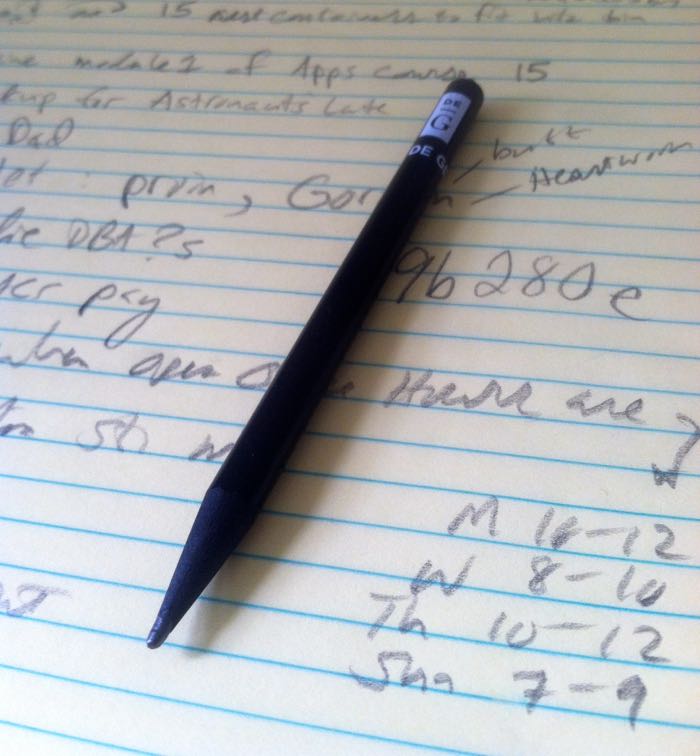 I had never seen anything like it. Black wood! Perfectly round. With a slightly smaller radius than the average pencil. And check out that severe logo. So sleek and elegant! The De Gruyter!

I found that the lead was just right too. It held a point for a long time, but wasn’t hard or scratchy.

I showed the thing off. When my mom asked about the trip, I told her about The De Gruyter. She said, “Europeans are really good at the little things.” I brought the pencil with me wherever I want, and I was super careful not to lose it.

And it started to influence me. I felt I should bring the rest of my life up to its level. If I was going to have such a great pencil in my pocket, I would need a nice wallet too, and a cool Moleskine pad, and better-fitting button-down shirts. And I’d need to start shaving with a vintage safety razor and lavender soap. (Most of those things didn’t happen, but I felt like they should.)

Maybe a year later, I was in a college library and a student who was working on a math exam asked me if I had a pencil he could borrow.

I explained the situation in some detail. He nodded over and over. I was unsure, but I let him borrow the De Gruyter. And he returned it,

“Wow! I can see why you wanted that back. Thanks for letting me use it.” (I hope he aced his exam. Nice kid.)

The pencil got shorter and shorter and a few years later I was on my way to another A.M.S. Mathematics convention, this time in Boston. At least half of my anticipation about the convention was centered around the possibility getting another De Gruyter.

When I got there I went right to the vendor area and found the booth. This time it was run by two attractive German women. (I can’t remember who was there the first time.) I was nervous, but I stepped up and said,

“This might sound weird, but two or three years ago I stopped at your booth and picked up a pencil and it was black with black wood and it was so neat. I carry it with me and I only use it for special things, and I’ve never seen another one like it and I was hoping I could get another one…”

I showed them the stubby little pencil. They looked me over for a few seconds. Then one of them stood up, startlingly fast, and pointed at a box. We both looked at the box. It was empty.

“We’re all out,” she said, in the same tone of voice you’d say “case closed.”

She dug under the table, looked in a small cardboard box, then reached her hand out to mine, dropping about a dozen brand new De Gruyters into my palm.

“This is all we have left.”

I stared at them.

I must have went into a reverie. And when I came to, they were both just sitting there staring at me. The novelty of the situation had worn off; all that was left was silence and me standing there ogling a handful of pencils.

And this is all I have left… 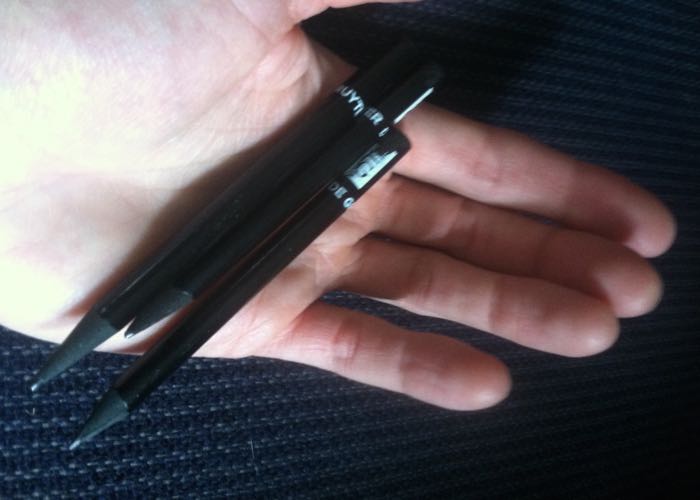 I gave a some of my De Gruyters away to very special people, and I’ve used the rest on various adventures, none of which would have happened in quite the same way, had I not raised my hand.

Next time you’re wondering if you should raise your hand, just go for it.