So I reach into the box and grab a pencil. What’s this? Blue? Is it a drafting pencil? No. 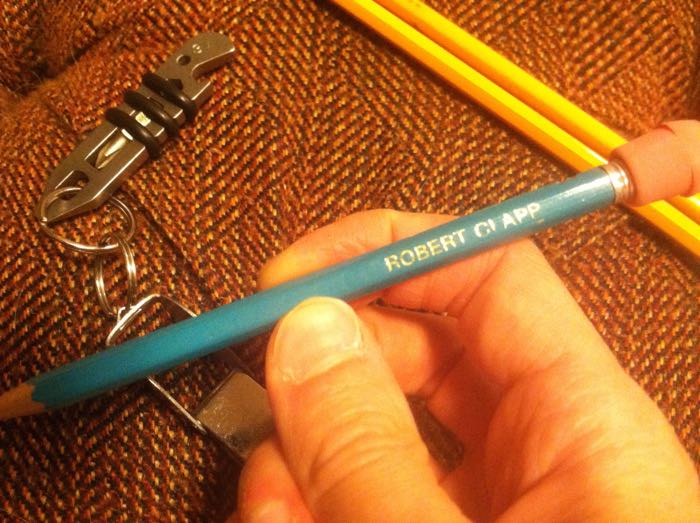 Hmmm… I wonder, who was Robert Clapp? I’ll have to look him up sometime. Whoa, could I write a little documentary essay about tracking him down? A mini-biography of a non-famous person? A pencil blogger’s take on Human Being, by Christopher Morley! Obscurities piled on obscurities. Imagine if I could give this pencil back to Robert Clapp. Maybe he had these pencils made thirty years ago and this is the only one left! I could write a story about that. Oh well, can’t use that one.

So I grab another. It’s a standard Dixon Ticonderoga “yellow and green.” 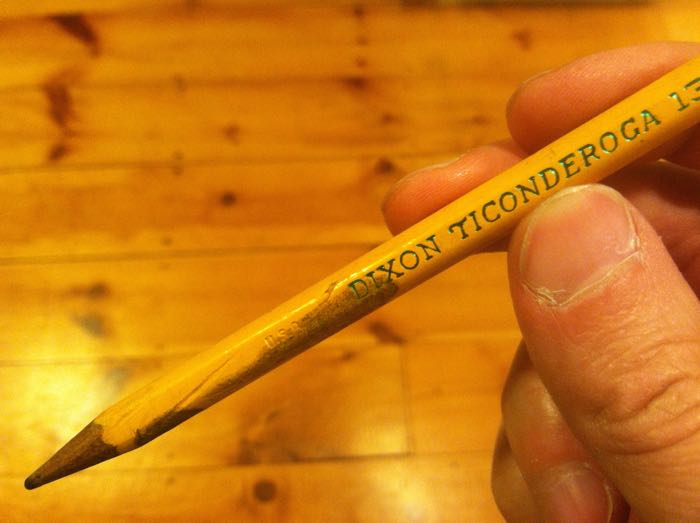 I look at the patina on the “cone,” and think maybe someday I’ll write a post on “cone patina.” I don’t know if anyone else calls that part of the pencil the “cone” and I certainly hope I just invented the term “cone patina.”

Then I notice areas where the finish has been rubbed off the pencil, exposing the wood underneath. How did that happen? I don’t think I’ve ever seen another pencil in this condition. I need to study this matter further, and to post my findings.

Then I look at the ferrule.

And when you stare in the abyss, it really does stare back. I see the ferrule for the first time, noticing the little ridges on the wider, inner band. (Hold on, are there three bands, or are there two yellow stripes painted onto one solid ferrule, giving the illusion of three bands? I’m going to have to dismantle a pencil sometime and report on this. Shoot, no I’m not–you can tell which is the case by looking at the closeup photo.)

Hmmm… I wonder what the little ridges are for. Holding the ferrule with my thumb and forefinger, it hits me: they’re for better gripping when you’re erasing. You pencil designers thought of everything! I wonder who came up with this. Would it be possible to find out? Maybe I’ll write an article about the evolution of the ferrule. Or maybe I’ll just collect some fun facts about the ferrule.

Well, I’ll have to set this pencil aside to remind me of all these ideas. So I grab another one.

Totally unremarkable. Boring! So boring I don’t even want to use it. Sigh. Then I remember the Staples 2 HB is the type of pencil reported on in the “Pencil Sightings – Kohl’s.” So this is a special pencil after all. Better pick a different one.

This could go on all day. One pencil after another. It seems I can’t use a pencil if I can potentially write about it. And I could write about each and every one, so it turns out I can’t use any of my pencils.